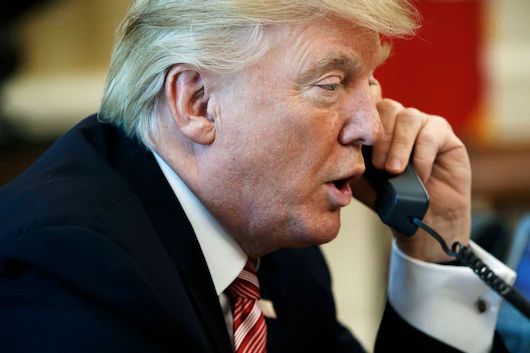 One of the bars that President Trump hoped to surpass in his Thursday morning interview on Fox Business was to demonstrate that he had the physical wherewithal to do the interview. Could he get through an extended live conversation without obvious difficulty breathing or coughing? Indeed he could, and from the standpoint of bolstering his argument that he’s not feeling the effects of his coronavirus infection, the interview was certainly a success.

It was also a success more broadly for the president, too, given that it was essentially an hour-long conversation between himself and a supporter. The network’s Maria Bartiromo, whose evolution into an explicitly pro-Trump advocate has been steadily obvious, served as little more than a hype woman, setting Trump up with softball questions and encouraging his responses. It wasn’t the first time she has played such a role, but it was nonetheless remarkable to see the scope of her disinterest in posing any challenge to the president.

This was true from start to finish, with Trump going on extended riffs about his opponents, real and perceived, including multiple assessments of Hillary Clinton’s use of a private email server more than seven years ago. But nowhere was Bartiromo’s failure to hold Trump to account more obvious — and potentially more dangerous — than in her sycophantic support of his claims about fraudulent voting.

By now it’s obvious that Trump and his allies want to frame mail-in votes as inherently suspicious because they know that those ballots are likely to favor former vice president Joe Biden. Trump wants vote totals as of election night to stand because votes counted after that point will almost certainly shift results toward Biden. This isn’t a conspiracy; it’s a function both of Democrats generally being more likely to cast ballots that are counted more slowly and, this year, being far more likely to do so in response to the coronavirus pandemic.
[FULL  STORY]